Building a computer model of something is a great way of learning
about its construction and material composition.

My knowledge of the roman gladius ( the classic roman sword) was previously limited to watching actors swing swords around on hollywood movie sets. However, a friend’s request for a picture of a roman sword set me on a path learning some facts about basic Roman military equipment. 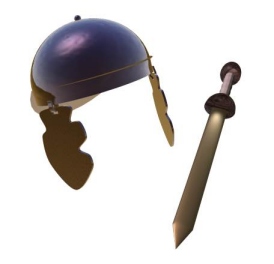 The picture of the roman sword and helmet (above) are the result of about 10
hours playing with a 3d graphics program (truespace 3 – given away for
free on the front of a computer magazine) over a ten week period.

The picture above might
be considered a photograph of the model I created.
The
gladius has a long history and there were as many subtle variations as
swordmakers, in a time before mass production techniques. However, the
Romans did like uniformity and all in all, one gladius was pretty much
like the next.

The basic roman sword blade would have been between 18 and 20 inches in length.

The handle and pommel of the gladius added another 6 to 8 inches.

The blade of the roman sword was about two inches wide and remained the same width all along
its length.

3D models are much
more interesting than just the end photo. A 3D representation of the sword
now sits on my computer and I can take a ‘photograph’ of it from any angle.
For instance, I could open the software and take a close-up shot of the
grip and pommel in no time at all… in fact…

Six minutes later, there it is. Not a brilliant shot, but you can clearly
see the carved bone grip made of four sections, each on about three quarters of an inch wide. (I have left half the
image as wire-frame so you can see the bits that make up the model).

In researching this model of a roman sword it was necessary to read lots of information on armour and
roman history. Source material included a trip to the British museum to view the copy of Trajan’s column which features carvings of hundreds of Roman Soldiers.
This researched highlighted the many syles and designs of the gladius
in different parts of the empire

There is still a lot to do before this is a finished model gladius (the blade
looks like it is made of dull gold rather than iron) but the beauty is
I can come back to it whenever I like. At present the sword looks quite
new, but it wouldn’t be too difficult to make it look a bit old an battered.

The helmet is also far from finished, but as you can see, the possibilities
of modeling as a tool to learning should not be underestimated. What next?
Scabbard, body armour? Centurion, Entire Roman grarrison?

As a technique, I don’t think this can replace forging a blade in the
heat of a furnace and carving a wooden pommel by hand (that’s next year’s
project), but nonetheless, the exercise of building a computer model of
a roman sword or an thing you are investigating is a great way to learn more about it.

Six months later, I have replaced the blade of my roman sword following a bit of research
and started work on a scabbard (thanks for the suggestion Vincent!)