How to produce a mosaic floor in Romano-British style

Firstly, the roman artists and artisans who created floor mosaics often worked with a limited palette which largely depended on the local materials available: 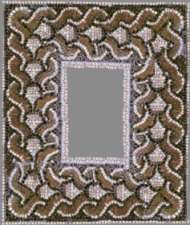 Although each mosaic is a unique piece the actual designs were often bought ‘off the shelf’ from pattern books. Aboout 850 individual tesserae (the little squares that make up the mosaic) would be used for each square foot (a very approximate average) which means that even a simple room mosaic (9 x 12 foot) would easily have many more than 100,000 pieces.

To produce a long-lasting floor, rubblehardcore was covered in concrete to form a smooth base surface. The pattern was scratched or painted onto the surface and then the long process of laying the mosaic could begin. A small area of wet mortar was set down and the tesserae would be set into it before it dried. The tesserae themsleves could be anything from 1 cm to 6 cm square.