Jewellery can be very useful to archaeologists and Historians. Jewellery equates to cultural adornment and disposeable wealth as well as values and beliefs. earings have been worn by many cultures throughout history. The ancient romans were particularly fond of earrings.

We know that the Roman ladies wore earings because wall paintings have survived where earings are clearly visible. It seems nothing sets off a clean toga like a bit of gold. 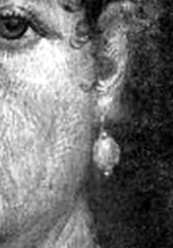 In addition we can safely say that the Roman women pierced their ears. The
pictures look pierced, but more importantly, some surviving statues have piercings
in place. 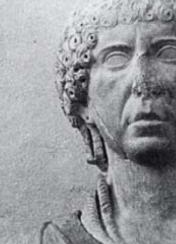 Both hoop and drop earings of counless designs and syles have been found
in archaeological digs across the former roman world. This page attempts to
gather pictures together to give researchers a good starting point when looking
at Roman ear rings. 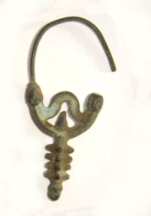 This gold 2nd Century A.D flower shaped roman earing (above) has a glass
bead centre. As you can see there was a high standard of metalwork was common
in roman jewellery in those times.

The golden earrings above were found in the house of Fabius Rufus in Pompeii
so they date from before 79 AD. They were made of gold with 2 pearls suspended
on each earing.