Learning how our ancestors made tools is a great way to try and understand their lives a little better. It is also great fun and rewarding.

It is also quite dangerous. You will get hurt. Possibly seriously, so never try to knap flint without eye protection and thick gloves as your minimum protection.  I am serious. My hands are scarred from cuts and I have come close to losing an eye on at  least three occasions.  While we are on the subject, a leather blacksmiths apron is another good idea.

Ok, lecture over, on with the knapping. Get a lump of flint, obsidian, chert or other vitreous stone.  As big a lump as you can hold in one hand. Now get a pig round pebble of granite or other hard stone and whack the two together, With luck the flint stone will split in half leaving you with a half ball shape with a shiny flat surface.

Anothe random whack and you might find you now have an edge. Well done. You are a paleolithic proto-human.  They world is yours for the taking.

However at this rate it will take a million years of evolution before you have learned to make a beautiful arrowhead, so we are going to have to help you along the road a way.

Firstly knapping tools evolved through time and space just as other more modern technologies have done. Many early paleolithic cultures simple bashed away until something useable emerged. Then later they would remove outer layers of a stone to eventually reveal the axe head or spear point that their mind’s eye told them was in the centre. Later still they developed techniques of mass production where a core was created from which many many serviceable flint blades could be struck. This was a huge advance, meaning that rather than produce one tool in an hour they could produce hundreds.

So, it is this ‘core’ technology that we are going to learn today. By the end of a few sessions you should be capable of knocking out bladelets which can be used for all sorts of purposes.

So the first thing is to know how to hit a rock against a rock. I know that sounds ridiculous, but after the first bash we did earlier it all comes down to angles. It is not particularly about strength, but mostly about accuracy.

Depending on what angle your hammer stone strikes the face of your core, you can get a short bladelet to drop off or a long one (long is better).

Now turn it just a little bit and strike the edge again. Work around the core and strike a bladelet off before turning the core a bladelets width and strike again. In this way you work round and round, producing many many blades all of a very similar shape. 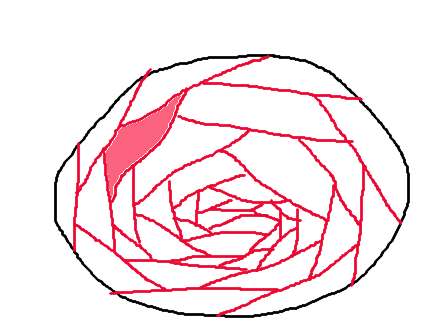 The drawing above shows one bladelet highlighted to show you the distinctive trapezoid shape  that is produced by this technique.

Here is a short bladelet that was knapped from a core.

The smaller nicks taken out of the blade edge to create the serrations you see were created via pressure flaking rather than precussion. Analysis reveals that horn or had bone were often the tools used for pressure flaking although later copper was popular for making pressure flakes.

Otzi the iceman was found with a 12 cm long pencil-like tool we call a retoucheur.  At the pointed end of a limewood ‘pencil’ an approximately 6 cm-long rod of a stag’s antler  was pushed deep in to the wood, leaving just a tip exposed which was used for pressure flaking tool edges, such as those of his flint dagger.