The flint arrow is one of humanity’s most impressive tools. 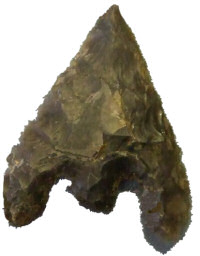 This example of a bronze age arrowhead was knapped from british flint and dug up in Berkshire in the 1980s.

With over 200 flakes per side, the man or woman who made it took time and effort to produce this tool.

The wide tangs are prefect for cutting into flesh, allowing this wonderful hunting tool to bring down prey quickly so as to provide food for the family.

Not all bronze age arrowheads were quite so fine. Often small scraps of fairly shapeless flint are classed as arrows since they do seem to have been hafted onto a stick to make an arrow.

A good question to ask is why some people spent so much time and effort on arrows, like the one above while others (or perhaps the same people?) created and used such crude arrows.

Perhaps the answer lies with how and what animals they were hunting. The smaller unworked arrows probably had much thinner edged on only a few molecules thick, which made them incredibly sharp, but easily broked and blunted. The larger worked example was a lot tougher and was probabaly used and reused on many ocassions.

Perhaps just as much thought went into the smaller arrows. Only a fool would have spend hours producing a weapon that could only be used once.

In the 1890s William Henry Holmes of the U. S. Bureau of Ethnology, wrote about the “manufacture of stone arrow-points” by native americans.

“The flaking of stone, and especially that part of it relating to the making of arrow-points, has very generally been regarded as a great mystery and is often spoken of as a lost art; but the art is still practiced by many of our aboriginal tribes, and it appears that almost any one who desires can by a little systematic practice do the work. Of course to acquire great skill much practice is necessary, but the methods are for the most part so well known and so simple that the mantle of mystery no longer enshrouds them.”