The Alice Holt Forest in Hampshire in the south of England gives its name to coarse Roman period pottery produced at various sites in the area from the first to 4th Centuries AD. 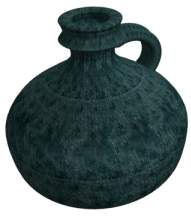 Alice Holt (also called Farnham Grey ware) is fairly common at sites across Roman southern and southeastern England, Alice Holt Pottery is characterised as a course grey sandy clay which has a very rough look. No Alice Holt ware has ever been recorded at sites further north than Norfolk. Most finds are associated with the immediate hampshire area, the coast and the Thames Valley.

We commonly believe that Alice Holt Pottery had none of the finesse associated with Samian wares of the same period.

However it has been argued by Dr Richard Pollard that Alice Holt dishes may have been percieved as ‘fine’ wares to their roman owners. Our mistake is on concentrating on the material of construction rather than the finished effect.