Home
A history of armour

Defensive clothing is not a universal norm. Some cultures actually removed clothing in order to do battle. On navy ships this was normal until quite recently (because if a bullet or shrapnel pulled clothing into a would you were far more likely to die of infection than if the wound was clean).

However for most of our history, defensive armour makes sense. Stopping a knife blade, spear point, arrow or other projectile could mean the difference between life or death.

But the nature of the weapons in use in a particular part of the world strongly affect the usefulness of the armour. For example, in Japan, the samurai sword was a terrible weapon, but to fight another warrior in heavy metal armour was to invite death. The Japanese invented lacquered paper armour which gave the best balance between protection and manoeuverability and even silk based armour which was considered very effective… that is until guns arrived from the west. Sadly paper armour does not survive in the archaeological record so there are few early examples to study.

In the west, leather was probably the earliest form of armour. Techniques to thicken and harden leather included boiling it and this was certainly known and used both by the ancient Greeks as well as the later Romans.

However, we generally remember these cultures for their metal armour. Archaeological evidence of bronze age armour dates back to around 1500bc where a bronze shoulder protection found in a tomb in Dendra, Argolis, Greece.

With the introduction of steel armour, the greeks and romans both developed steel as the primary material for armour. However, they continued to use bronze as well. Whether it was bronze or steel and whether welded rings of maile, or pressed sheets, these militaristic cultures evolved excellent body armour for different types of conflict.

Maile rings were joined in a 4 rings into 1 pattern to produce flexible ‘cloth’ that could be made to measure and provided a great degree of protection against edged weapons. Up to 30,000 rings could be joined together to make one lorica hamata, the chainmail shirt of the roman army which was standard issue for almost 500 years. 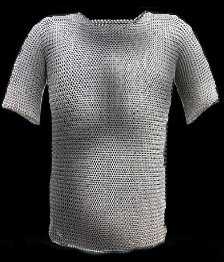 Along side maile the torso could be protected with scale armour, plate armour or the full curias, a metal corset, often shaped to represent the male muscular form.

In post-Roman Europe, these elaborate forms were less widely seen, but the use of maile continued and evolved.

Leg protectors (greaves) were padded inners with a metal outer facing that could protect the tibia from a frontal attack with a sword or axe. These were in use from around 1500bc, right up until the late medieval times.

In helmet design, the Spangenhelm for a long while replaced the beaten metal helmet due to its ease of construction.

A series of metal bands were rivetted together and then curved plates were added to create the distinctive shape that we associate with Vikings, although it was actually used throughout europe, the middle east and north africa.

However over time these fell out of fashion and a wide variety of helmets replaced them.

The full knights suit of armour reached its zenith in around 1450. 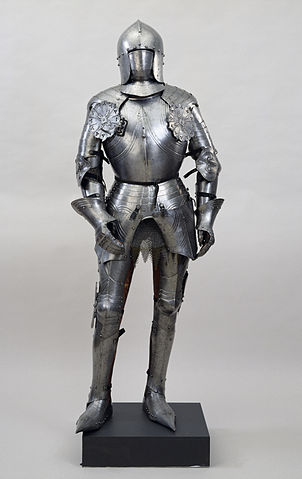 Then the introduction of the gun slowly killed off armour and by the 20th century it had all but disappeared from all military clothing even at a ceremonial level. One exception is the neck plate or gorget which is still worn by the officer of the day in the Swedish army.

At the end of the 20th century armour for infantry made a reappearance in the form of kevlar ‘bullet proof vests’ which have become standard for any well equipped military force.